Diane O’Brien, in the penbaypilot.com, writes: 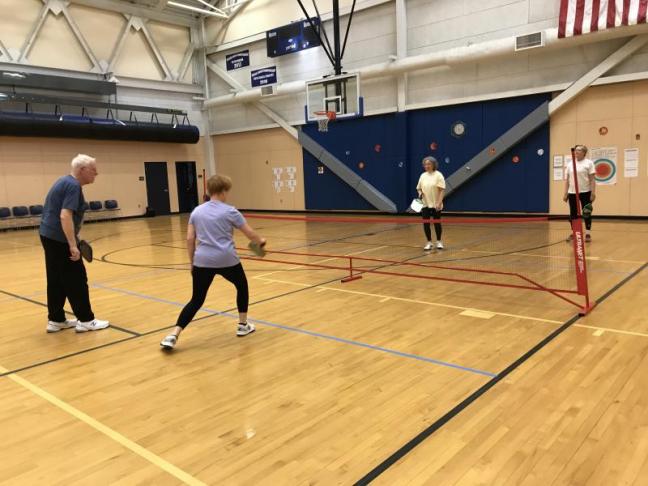 Greta Gulezian has a vision: free and accessible Pickleball for all. Pickleball? Have you heard of it? The very name makes you giggle, doesn’t it? Greta certainly smiles when she talks about it, explaining how this simple paddle sport can change lives by building community. That’s putting a lot on a game, but then, stranger things have happened.

Back to Pickleball. What is it anyway? According to a Midcoast Maine Pickleball brochure, it’s “a paddle sport created for all ages and skill levels. The rules are simple and the game is easy for beginners to learn, but can develop into a quick, fast-paced, competitive game for experienced players.” It has elements of tennis, badminton and ping-pong, is played both indoors or outdoors, and the only equipment are a simple paddle and a plastic, whiffle-type ball. Oh, and a court.

Pickleball is being played regularly all over the Midcoast: at Point Lookout, Penbay Y, Waldo County Y, and MRC. There’s a nominal fee to play for non-members. Greta says that here in Lincolnville we already have the facilities for Pickleball courts, and they’re free.

Avid tennis players, Greta and husband Gary frequented the courts at the school until gradually she says her body wasn’t happy with that game. But she kept her eye on the two tennis courts, built around the time the new school was completed, 2005, and which had been funded by Midcoast’s MBNA philanthropist, Charlie Cawley.

Somewhere along the way she was introduced to Pickleball and was promptly hooked. Here was a sport that had very few equipment needs other than an inexpensive paddle, a plastic ball, a net, and a court. All ages and all skill levels can play; the games are short, the sport is cheap – especially if played on our town facilities where it’s free – and best of all, it builds community.

Here’s where the visionary comes in. Greta sees Pickleball as a way to bring people together. Typically the winners of a game stay on the court, switch sides, and two new players join. It’s a perfect game for families to play. With a court half the size of a tennis court it’s not a particularly strenuous sport – think a combination of badminton and ping pong. “You too can be a mediocre Pickleball player within an hour” the saying goes. And be having a lot of fun and making new friends.

A year ago she along with a few other players approached the town’s Recreation Commission about getting permission to use the school gym on Saturdays. Principal Paul Russo gave them the OK along with use of the school’s nets, paddles, and balls.

Initially using road cones for boundaries, the group has since received permission to use tape to mark off the courts on the gym floor and has been doing that since this past November, laying out the lines and then removing the tape after each session. Since then attendance this winter at the regular Saturday morning “Introduction to Pickleball” and “Open Play” has grown.

This past Saturday 18 players showed up including 4 who’d never even seen Pickleball played before. Greta announces the Saturday sessions (9 – 11 a.m.) through the Lincolnville Bulletin Board and an email group. Contact her to be put on her list.

Meanwhile, she’s had her eye on those outdoor tennis courts. Starting last July, with permission from the Rec Commission and David Kinney volunteers began temporarily taping a PB court on one side of one of the courts.

Through September weekly “Introduction” and “Open Play” sessions were held outdoors. Greta keeps records. In the past year, she says, volunteers contributed more than 70 hours of their time at some 24 sessions where more than 115 people have been introduced to the game.

Now she’s looking forward to the upcoming outdoor Pickleball season. There are two issues: courts and equipment. The proposed long-range plan is to permanently paint two courts on the far tennis court, one on either side of the net. Tennis and Pickleball courts co-exist in many communities world-wide, she says.

These town tennis courts have not had resurfacing or repainting in the more than 12 years since their installation. General refurbishing of outdoor courts is recommended every 5-7 years. Ours are showing multiple areas of pitting which can lead to cracking when the frost gets in. However, for this next season Greta’s hoping to paint the lines for the two Pickleball courts with volunteers at a cost of about $120 for paint, etc. Maybe in the near future the town will look at professional resurfacing.

Pickleball is most often played with doubles, though singles is an option, so eight paddles are needed for two games played simultaneously. When played on a tennis court a portable Pickleball net system is used; since two courts are planned, that’s two nets. With a waterproof storage chest to hold the nets, paddles and balls at the courts anyone can come and play anytime.

Greta requested $587 for this basic equipment at a recent Budget Committee meeting. If the town approves it at the June Town Meeting we become eligible for a grant that reimburses half the cost.

Visionaries come in many guises. Some see buildings, some see a business. Others dream of preserving our natural world. Who, I wonder, was the visionary behind Coastal Mountains Land Trust? Visioning can be a kind of education: think of how Corelyn Senn has shown us the vibrant animal life in our own backyards through her wildlife cameras.

And then there’s Greta, imagining a town where folks can gather for an hour of fun and laughter over a game with a silly name.